I was honored to be asked to give a little presentation on Machinima at Scott Rettberg’s “The Network as a Space and Medium for Collaborative Interdisciplinary Art Practice”. I had a great time and met some truly fantastic and inspirational people! I was squeezed in to the topic of Anthropophagy, which I’m still trying to figure out – but will write more about in another blogpost. My initial thought is Machinima is anthropophagic (not sure I can say that – but what the hell – I’ll give it a go) of game narrative – which opens up a whole box of interest worms. But … it’s not a cannibalistic media in itself. But…yeah… we’ll leave room for that somewhere else.

My presentation is available on Google Docs but I’ll cut and paste it here – as the notes are more important than the actual slides (although you can find them by opening the speaker notes).

GAMEPLAYING FOR THE ARTS

When gaming avatars perform for the camera, not for the game

– It’s communicating with an intelligence that is already there

– Manipulating the machine to portray something different, to create their own story. Or recording communication with the machine and then using editing techniques.

– Using media techniques that are already associated with film, tv  or video culture.

– You’ll have loads of music videos that are influenced by the MTV generation of storytelling. Editing and linearity of creating cinema is evident.

– This becomes the interdisciplinary part of machinima

– The case of modding – a lot of hacking in mchinima making

– But really this is just an add on. Granted – machinima artists do use a lot of time and skill in designing their environment and characters – and that is an important component in the “art” of machinima.

What have you done with Alice?

So it´s this communication between the machine and player that intrigues me. Gameplaying becomes it´s own storytelling component. This mastery of gameplay has an added meaning to the film. One of my favorite machinima films is Alice, which is filmed using The Sims. The film starts with this little girl having nightmares. Now in The Sims, you can´t just tell your sim to have a nightmare – you have to put circumstances in her life that make her so miserable that she starts to have nightmares. And throughout the film she has different anxiety attacks. It makes the film, it gives an added affect to the turmoils of Alice – which ofcourse is based on Alice in Wonderland.

Henry Lowood has called this master of puppetry – and I´m liking this term more and more. This added bonus in the story can be accounted for as an appreciation of puppeteering or – as I like to call it mastery of gameplay. But in the instance of Alice I would like to think that the gameplay involved has a certain meaning that gives the character more debth. The communication involved with the machine is

At this point I rather rudely squeezed in Alice, even though there wasn’t enough time

So machinima actually started with online gaming. In the 1990s games were being produced with a filming application – intentionally made for the use of watching replays to examine gameplay – but gamers will be gamers and in 1996 we saw what is generally agreed upon – the first machinima – Diary of a Camper. Made in Quake by a bunch of gamers online. We saw a flood of quake movies come after that. Abruptly stopped after a while, though – which I think has more to do with the game than the enjoyment of Quake. I’m quite intrigued to see how popular World of Warcraft movies will be after 10 years. So anyways – machinima spawned from online gaming, which in turn needs a lot of collaboration.

Even though a machinima film is made in single player game there’s still massive communities helping each other out online. F.ex. I often say that the single player The Sims is a much more successful online game than World of Warcraft because of the massive online communities involved in character creation, clothes, environments a.s.o. 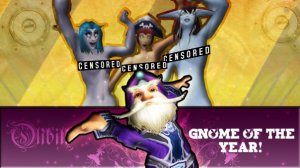 Meet my good friend Olibith. Olibith was created as a gnome for roleplaying on one of the WoW roleplaying servers. He is now so famous that he cannot roleplay anymore. Olibith has become, rather involuntarily a machinima avatar. His sole purpose in his avatar life is perform for machinima films.

The rather exciting thing is that Olibith is creating an intriguing series of narratives that move beyond the game of World of Warcraft. I expect to one day see a full feature film with Olibith as a main character some day soon.

This is a collection of seperate shorts by several machinima artists and I feel that it clearly exemplifies the way that each artist has their own style and expression. The style of Never Stay Tuned is also a mockery (and appreciation) of other media entertainment, which works so well in machinima. The way that avatars in a gaming world are imitating the ‘real world’ media – just works so well! And this group of machinima artists are smart in their creative storytelling.

And that was that – Thank You!