So sorry for the delay of this post. Real Life has claimed my full focus the last couple of weeks and I also had to reach some deadlines applying for funding 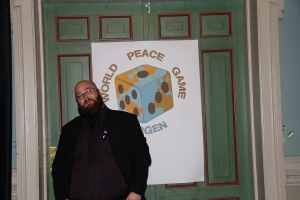 to do the game again in Oslo in February. So thanks for being patient. I hope that my memory of the events are still somewhat intact.

I can’t take complete credit for the conclusions that I’ll be writing here. On the last gaming day we had a great debrief session and a lot of the observations I will mention here are from that. Almost all of the players had something they wanted to share in the debrief, so I credit them all with these observations.

First, a few words about our state of mind when starting the game

Our group was so diverse in nationality, age and background that we witnessed some truly beautiful moments that certainly left me moved and my belief in the wonders of the game enhanced. Kristian Bjørkelo was often around us observing and sometimes commenting because he’s writing an article about the game. One day he commented how united we all were in creating actual peace and that he didn’t see enough conflict and terror in us. I believe he accused us all of being a bunch of lefties. I think he may be partly right, but I also believe that he was just given this impression from observing us and not physically living the crisis’ with us. But Grethe Melby reflected one night upon our state of mind as well, wondering if we were perhaps unconsciously infuenced by our grief and the collective compassion from
the Norwegian terror attackstwo weeks before. I believe they both have relevant points and perhaps this is a sign of playing with young adults and older – we all have baggage, experience and opinions of the world that we take very seriously. One of our adult players was Bosnian and found herself reliving 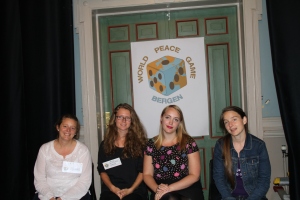 several emotions from her experiences of the war. I felt that she was such an invaluable player. She was fierce in her pursuit for peace and was a great reminder of how realistic all the scenarios that come out of John’s game are. He’s managed to create a game that teaches us about the complexities of the world – by experiencing and feeling it. This is so unique, for most who try to create such games get lost in the complexities and the players have to end up reading and overanalysing.

I believe that our state of mind and our past personal experiences helped bring the game to a whole new level and gave me a lot of ideas on how we can build from this. I keep wanting to use the word “simplistic” when I describe the gameplay of World Peace Game – but this seems just so incredibly unfair because it is anything but! It is however simple to get involved in the game, and I think that’s what’s fascinated me the most. There are few barriers before you feel the immense responsibility and importance of your contribution to the game and that’s a magical ingredient. When we started to feel the responsibility – the passion and our feelings became real. 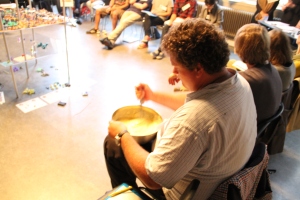 I was last in line in selecting my cabinet so my selections were often a selection based on the other’s unselection (!). Like Prime Minister Fernandez who always chose men – I decided to pick a woman for each man he picked, so naturally I ended up with a women’s only team (and we kicked #$$!). My first selection was Eira – a young girl who had proven herself to be very outspoken, smart and just really cool after only an hour together in the same room. Eira became my Secretary of State. My second selection was Maja, who I had met the day before and was super impressed by. She’s such a bright and smart young woman with a lot of fight in her, so she naturally became my Defense Minister. For the selection of my Chief Financial Officer I chose a woman who was similar in age to me and who I had heard give a presentation on Creative Commons for Girl Geeks Bergen – Grethe Melby. Yet another incredibly smart woman and teacher that I felt would contribute to a strong and vibrant team. I’m also pretty sure I panicked about my choice in eager teens/tweens and wanted someone my own age by my side as an ally.

The kids are alright

My cool crew! They just blew my mind! So smart people!

As a team I think we functioned very well. I delegated a lot of the deliberation to my Defense Minister and Secretary of State. They had so much fight in them and were just so determined. I learned so much from them! Where I felt the need to build up our defenses and make sure that we had a military that was able to defend our country, Ashbury, against any attack from the others – they just looked at me and asked “Why? Shouldn’t we just get with it and create world peace?”. How could I argue? I credit a lot of the game’s direction and the fact that we were able to proclaim world peace to these two fighters. I was certain that they would declare a coup d’état when I foolishly invested in a software production company together with the arms dealers without specifying what kind of software was to be made. But they managed to forgive me and move on. There was an extra bonus with having these two fireballs on my team – they knew a few of the other players. So when they had to negotiate and solve certain problems they went straight to their friends to solve them. They did not, however, know anyone in the oil rich country, Fujistan – who incidently only consisted of “adults”, so Grethe and I handled these negotiations, although not as focused as our two other team members. Several times during the game, I was reminded of how old I am and how slowly my mind works compared to a 19 year old. It was fascinating and at times very humbling to realise this. I have to admit – my confidence in my own abilities wavered at times.

The UN and The World Bank declaring peace - ok, I'll admit it - I had a tear in my eye!

If anything, my faith in the youth of today is just so much enforced. They’re so much smarter than we were and so much more involved. I learned so much from working together with them and later debriefing with them. It was absolutely such a golden treasure  – that I want to do more.

But here I am – going on and on and not writing about the main drama event, where the defence minister of Subsistan resigns because he strongly disagrees with his Prime Minister! I’m sure term papers in political science could analyse and document this event – for it was truly exciting, real and intense! I’m uncertain if I’ll delegate time to write about it in another blog post, I can’t promise anything. For now I’ll leave you with a dilemma that we ended up facing; When a former defence minister is in exile in UN controlled territory – can he then vote when a re-election is forced in his country because of mistrust towards the Prime Minister?

That’s all I have time to give you for now – you’ll be hearing more soon! ;)