I’m determined to get my thoughts from The Story documented somehow, although a week has passed, I shall continue on.

7) I was late coming back after lunch and missed the introduction of Paul Bennun & Nick Ryan. This is a session I would have loved to be more prepared for. I didn’t know who they were and wish I’d looked them up and played their games before attending, because their story was astounding!

Their story was sound. Together they have created a game based entirely on sound called Papa Sangre (downloading now).

Entering the Palace of Bones from Papa Sangre on Vimeo.

Absolutely spectacular, right? Definitely challenging gameplay. I’m really looking forward to playing it. I’m going to have to rely on Antony Mayfield’s notes of the talk, however – because for me it is a mind blowing blurb at the moment. I remember thinking what a spectacular notion, 3D sound is. Also how to think and perceive through sound. Very cool. As Mr. Mayfield says:

There was some really interesting discussions during the session, including ideas about creative and navigational language of sound for storytelling, which I’d like to hear more about.
One point which really struck me was when Nick reminded us just how hi-tech recorded sound was, how new it was – just a hundred years ago, as he put it, if you heard a sound you could be sure it was something happening nearby. Recorded sound allows us to separate time and location from the listening experience.

Here’s some more of Nick Ryan’s work which was extremely cool!

8) Mary Hamilton and her Zombie LARP – I’m sure everyone who knows me knows how I was sitting at the edge of my seat absolutely thrilled with her presentation! It was just so much fun listening to her. I’m not really a LARPER – but I would consider playing a Zombie LARP – just because it seems like so much fun! And that’s exactly what Mary’s presentation was – FUN! She’s generously shared her slideshow:

I think what really hit home with me most, was the character creation process. Players are given a fun nerf gun – and that was it. The 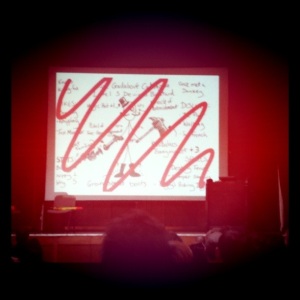 player’s character evolved around the mechanics of the gun. I found that very simple, smart and welcoming! It seems so open and ready to accept any story that wants to be told. I really like that.

The nub of her approach to story was this: “we create edge conditions so people can make their own stories.” She also described how they had formalised or made space for story telling after games (“frothing” as LARP participants call it).