This has been a subject that’s been buzzing around in my head for a while. Should we focus on advertising more games specifically to women, in which case, what would this look like and is it really necessary?

It seems to me that there’s still a template for advertising games that focuses on a predominately teenage male audience. Which makes me feel uncomfortable at times. I also often find myself wondering how I would learn about all the beautiful and amazing games that I play, if I didn’t work in the industry. I follow game developers, game media, game journalists, game academics, game musicians and game artists – so of course I get access to great new games, because this is my life. But if I were just a woman playing as a hobby, where would I go for my information, who’s opinion would I listen to?

We know that women play games. We play quite a lot actually according to the last ESA report:

So I guess we’re doing rather well without having female targeted marketing? And that’s awesome! This makes me so happy! But I wonder if we’ve only scratched the surface?

Let’s not paint everything pink just yet!

answer to reaching more women. For that is almost as insulting as being spoken to like I’m a teenage boy. No offense to Hello Kitty fans out there – but it doesn’t work for all of us.

So how do we reach this/my demographic? Even though women have found a way to find the games that they love without specific marketing or media that is catered to them, I’m not satisfied with it becoming a status quo. But I don’t want to separate games into genders either.

What I love about today’s games market is that there is sooo much good stuff to choose from. There’s something for all your needs. Shoot’em’ups, FPS, story driven games, rhythm games … you get the drift. I’m not at all saying that we should have a category that is marked just for women – or am I? My fear with this, of course, is that we end up with stereotypical sweet games in such a category and I really don’t want that. Women gamers are as diverse as the games market is and having a category just for women seems dangerous for me. BUT … I might like to follow female curators on Steam, for example.

Are Women’s magazines, blogs and websites the answer?

games. In fact … it’s been an ambition of mine to collect a group of female game writers to write articles that have anything to do with games and I could sell them into the magazines. I’m so passionate about making this happen that I’m certain I’ll be able to pull it off at one point. But recently, I realized that if I did this, it would mean living on the fringes of the games industry and focusing mainly on gaining a network in the women’s media business and I’m not sure if I’m ready to do that. I’m desperately in love with the games industry and leaving it will be a painful.

But then … there’s so much kick ass women’s media out there. BUST magazine, being one of my favorites! The world isn’t as bleak as I picture it. There’s so much more out there than fashion magazines for the thin and fabulous! And I, for one, would like to see them writing more about games. I would certainly like to be a part of that.

I was so happy when Sweety High, a zine for teenage and tween girls, decided to cover World To The West by my friends at Rain: https://www.sweetyhigh.com/read/world-to-the-west-review-050317. I want to see more of that!

So if we can agree that we need to cater more advertising to women on games, what does that mean exactly? My theory is that some of the things that we’ve become accustomed to using in games advertising aren’t always as relevant when trying to reach the female 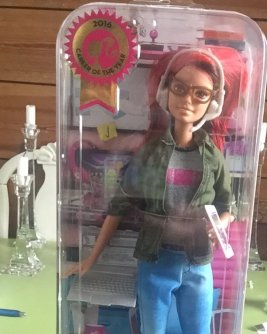 demographic. And I think that when we’re making marketing campaigns for these games we should cater to all that are interested in games.

I want to do more research on this and I want to be respectful of women’s individuality and not put us all into this pink vault that none of us feel comfortable in. Too often, when we’re marketing to women, we think of them as mothers, and I want that communication with female consumers to expand and treat them as individuals that like to play games. Advertising space focused on women is expensive. It’s a market that so many advertisers fight for. There’s a lot of advertisers that wish to communicate with us and show us their products, so we therefore become expensive. But there are ways around this and there are ways to make sure the ROI can be great.

I want us to start exploring this! So this is a start in a series of blogposts where I’ll be looking at different ways to approach women by advertising and talking about games! Looking forward to hearing your feedback!